In every Department of the University of the Aegean, the community of students is represented through their Associations. Students’ Associations are the institution through which students are represented in an orderly way and the “fields” where political, social, cultural issues are discussed and where actions / interventions are organised for a series of issues concerning studies and the improvement of students’ quality of life.

The General Assembly is the decisive body of Students’ Associations. The highest possible participation in General Assemblies safeguards the highest democratic representation of the opinions/ views of students’ communities. The active participation of students (women and men), the elaboration of views, ideas, and proposals in a creative and critical spirit in order to make joint decisions about how to manage issues regarding the community of students is a precondition.

With the initiative of students and other members of the academic community, a multitude of students’ groups/societies have been created in the UAegean. Students groups are the nucleus of life and culture for both the University and the local communities of the islands where the University is located. Student portals have also been set up to provide useful information and communication opportunities. These channels provide students the opportunity to participate in groups involved with dance, theatre, music and multitude activities framing the development of actions and initiatives based on their interests.

The Academic Innovation University Group – BLUE Α.Ι.Μ. consists of members of the academic community of Chios, i.e. students, young scientists and also of professors of the School of Administrative Sciences and of the Polytechnic School of the University of the Aegean.

The Group is involved in the development of innovative business plans, exploring in the context of its multidimensional activities the tools, methods, results and products of the ERASMUS + ABC MELES 2 Project for business plans and coaching. Group members meet regularly, i.e. at least once a week in the venues of the Academic Unit of Chios, and often invite entrepreneurs and scientists to share their knowledge and experience with the Group.

BLUE Α.Ι.Μ. is continuously renewed with students, converses with the entrepreneurial community of the island of Chios, focusing on innovation and aiming to interact with the research and entrepreneurial dynamic of the Aegean with economic, social and technological benefits for all sides.

During the 2018-2019 academic year members of BLUE Α.Ι.Μ. participated and won awards during the “Blue Hackathon 2018” (Athens, 22-23/12/2018, Evgenidio Foundation) and the 1st Chios Blue Hackathon” (Chios, 15-16/5/2019, Chios Mastic Museum and University of the Aegean), which are competitions for business ideas and the promotion of business proposals to find solutions creating value for islandic destinations by improving their attractiveness and supporting sustainability, local entrepreneurship and regional development. They also participated in the “5th Junior Achievement Greece”, a PanHellenic Students’ Competition for Innovation and Entrepreneurship held on 30 May 2019 at the Cultural Center “Hellenic Cosmos” of the Foundation of the Hellenic World. The Group also participated in the cultural events to celebrate the European Maritime Day in 2019 organised at the Academic Unit of Chios 13-21 May 2019.

The aims of BLUE Α.Ι.Μ. for the future are to participate in Panhellenic and international students’ competitions on entrepreneurship and innovation, to develop business plans to be applied in the labour market and to consolidate trustful relationships with the business community of Chios.

Sailing Team of the Academic Unit of Chios

The Sailing Team of the Academic Unit of Chios was established in February 2019 after an initiative by the students of the Department of Shipping, Trade and Transport who due to the subject of their studies are in constant interaction with people related to the sea, teaching staff and members of the Laboratory Teaching Staff (E.D.I.P.) (i.e. a captain and an engineer) and the Specialised Technical Laboratory Staff (E.T.E.P.) (i.e. a sailing trainer) of the Department. In March 2019 the team was supported by students from other Departments of Chios and is continuously acquiring new members and students wishing to have fun, train and exploit this kind of life on an Aegean island.

The team meets regularly, at least once every two weeks, in the venues of the Academic Unit of Chios and has since May began going out in a boat. During meetings team members discuss theoretical and practical issues about sailing and sailing skills, e.g. using sails, navigation, required rescue equipment, anchors, ropes, knots, setting course, lights, rules to avoid collision, meteorology, etc.

Interacting with the local society the nautical tradition of which is affluent, members of the Sailing Team on 2 April 2019 organised a meeting to get to know local professionals in the sailing and yachting field who shared their experience and discussed various interesting issues about business ideas. The team also participated in the cultural events to celebrate the European Maritime Day in 2019 held at the Academic Unit of Chios 13-21 May 2019, with the organisation of traditional wooden boat rowing at the port of Chios (20 May 2019) in cooperation with the Scouts of Greece – Region of Chios – Department of Scouts.

The aims of the Sailing Team for the future include developing cooperation with local sailing and yachting clubs of the island, establishing open two-way communication with local professionals, and participating in boat races as for example the Aegean Regatta. The primary objective of the Sailing Team is to promote a stronger relationships between students and the sea in order for them to gain a unique experience during their studies.

Vinyls - The Students' Band of Chios

“Vinyls” the repertoire of which includes rock, blues and funk music have rehearsals every Wednesday which are open to students. Rehearsals take place at the “Giannis Karalis” Amphitheatre

During the academic year 2018-2019 the band put on two concerts, the first one on 17 November 2018 during the commemoration event for the Polytechnic uprising at the foyer of the “Giannis Karalis” Amphitheatre and the second one on 16 May 2019 during the cultural events for the celebration the European Maritime held at the Academic Unit of Chios 13-21 May 2019.

The future plans of Vinyls include attracting new members, organising concerts at the University of the Aegean, participating in festivals and joint music performances in cooperation with the Music School and cultural groups of Chios. 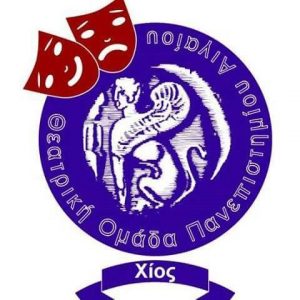 The Students’ Theatrical Group of the Academic Unit of Chios was established in 2015 through a cooperation of students with the theatrical group of the 1st Vocational Senior High School (EPAL) of Chios during the commemoration event for the Polytechnic uprising. The group was created in order to cover the needs of students for creative and artistic expression mainly through the art of the theatre. Though new the group is a continuation of previous attempts, as the one in 1992, which functioned as a theatrical workshop and also of the more recent, i.e. “Homo Sapises” involved mainly with stand-up theatre. The group meets regularly and rehearses plays, every Tuesday, Thursday and Saturday at the “Giannis Karalis”:

To be exposed to the audience, to quest, to document and to communicate

Group members come from all the Departments of the Academic Unit and are connected by curiosity, love for art, the quest for expression forms and the need for collective action in times of individualism. The selection of texts and plays is based on the idea that in amateur theatre everyone has the right to be exposed to the public. The word “play” precedes the word “theatre” (defining the interpretation of a role) and everyone is entitled to play. In the context of this playing we are trying to touch on situations, attitudes, characters and events, tracing human trails. The essence of every day is hidden behind the obvious and visible and we are searching for it through art.

We decided that a verse by Mayakovsky expresses our philosophy: “Art must not reflect like a mirror but magnify like a magnifying glass” and we are trying to serve this principle through deep reading of the plays we select.

2016: The roles we play in our lives and the trace we leave in time. Playwrights: Marios Pontikas, Kostas Mourselas, Antonis Sfalis.

2017: The same person over the same period of time changes roles in order to survive while caught between the clashing rocks of “want” and “have to” of the ego and superego. The collision is tragic and at the same time funny making the hero’s life tough and pleasant,  reality contradictory and leading spectators to laugh incessantly. “A Tailor for Ladies”, by Georges Feydeau.

The Students’ Cinema Group Cine-Aegean was established with initiative of students in November 2016. The first project was the documentary by Angeliki Kourouni “Golden Dawn: A personal affair” on 4 April 2017, in cooperation with the Solidary Committee “Lathra?”

During the 2018-2019 academic year Cine-Aegean organised the following joint activities:

Cine-Aegean also participated in the cultural events organised in May 2019 and the events to celebrate the European Maritime Day in 2019 organised at the Academic Unit of Chios, with a film projection on 13 May 2019 and the projection of a documentary entitled “Citizen Europe” on 21 May 2019, which was projected simultaneously in 20 cities in Europe.

The future plans of Cine-Aegean include cooperation with students’ cinema groups of the University of the Aegean and other Universities, cooperation with primary and high schools of Chios aiming to project and produce films, participation in the students cinema festival of the North and South Aegean “Cinemathia” and in cinema festivals organised in the Greece.

The University of the Aegean, constantly aiming to support the members of the University community and especially its students to complete their studies smoothly, tries to provide multiple services among them the psychosocial care services.

Within this framework, the “Network of Counseling and Psychological Support Centres” with its administrative headquarters in Mytilini, was established by decision of the Senate No. 17 on the date of 04.06.2008. The Network, through the establishment of 6 branches in its respective units, provides the students with counseling services and primary psychosocial support, as well as the employees at the University and the local community and moreover handles educational needs and research programs in collaboration with other agencies, in matters of psychosocial needs, clinical and counseling psychology.

All services are provided free of charge and in strict confidence, in accordance with the principles of confidentiality.

In collaboration with the Prevention Centre of Addictions and the Promotion of Mental Health in Chios.

Psychologist of the Councelling Center

The “Aegean University Sports” sector enables students to participate in a variety of sports activities and events based on their interests and sports preferences. By participating in the representative university groups of individual and group sports, students have the opportunity to represent the University in national university sports competitions and in European or world university competitions.

Activities for specific sports are organised on a regular basis in all the islands where university units are located. Depending on the interest the students show, activities are also organized in additional sports, often with technical support from students with proven experience and championship course in the respective sport.